In the previous post, one of the barriers identified was the entrenched viewpoint that social media such as Facebook, Twitter, Snapchat...etc are just for socializing with family and friends.


In diagnosing the problems with the entrenchment of the common social media attitude in regards to its purpose, we are faced with a couple of questions that need to be addressed if we desire to capitalize on the potential that social media holds for effective e-Learning:

The elements that describe social media could simply be described by the following:


Community: In defining community, it is necessary to point out that the nature of community has changed from what was considered community in the past. The community of the past had common bonds such as occupation, morality ( A community church used to be placed at the center of a community in the western world), beliefs about education, and common traditions as represented by ideas such as holidays on the calendar). The connections with other communities globally were through the transportation and communication technologies of the time. The common restriction was that use of such technologies were constrained by time.

With the advancement of technology in the 20th & 21st century, the nature of community was transformed. With the advancement of knowledge and information brought on by the exponential changes in technology, the idea of community lost some of the constraints involving time and place with community transforming from being localized to global. Due to the growth of information and knowledge across many disciplines, a new community or "culture of learning" became one of the important prerequisites for both business and education in order not just to survive but move forward within a global context. This "culture of learning" is what e-Learning strives to establish in a totally online environment. Community is important in the online world. In order to establish this "culture of learning", there is a need to break away from a status quo which is decades old and definitely not in sync with the needs of 21st century communities.

Conversations & Participation: With the removal of the constraints of time and space, opportunities were opened up for the development of a way to extend personal relationships from the local stage to the world stage. Part of the growth of this "culture of learning" was the development of global networks focused on inter-relationships that we call "social media networks". When we compare these two elements with what is needed in effective e-Learning we realize that these terms correspond to the elements of "collaboration" and "engagement". 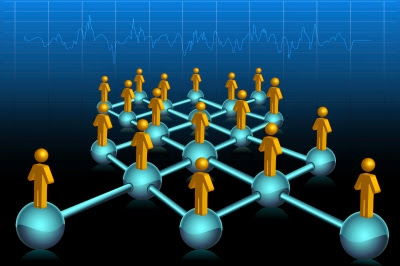 Just as within the social media networks, conversations often focus on current events common to the inter-relationships, collaboration and engagement in effective e-Learning must focus on identification and solution of real world problems where feedback on decisions that are made have real world consequences. This brings us back to a change in the role of educator and student. The educator becomes a mentor and guide in effective process skills that students need to develop in order to become much needed "agents of change" in societies that need to separate and interpret the forces of change in technology and the generation of information and knowledge. The bottom line is that"


"... both business and education must become proactive in dealing with the perfect storm of technological and information change rather than continuously retreating into steadily shrinking comfort zones through being reactive to change."


So, this brings us to a very pertinent question:


The answer to that question involves the re-design of learning experiences so that they are irresistibly engaging and make use of the very concepts of social media that has made it a spectacular world wide phenomenon. This involves re-designing learning experiences so that they focus less on the acquirement of information by the student for the sake of becoming a "human database" to be tested and approved by education systems. Given the exponentially growing amount of information and knowledge that is happening in the 21st century, maintaining this type of focus presents the student with an impossible task. Instead, teaching students how to engage, think and collaborate on the web for real world purposes that is key to enriching the societies they will live in should be the prime directive for education. This means that education becomes far more meaningful and relevant to students because now they are learning how to contribute to their present and future in meaningful ways.

The next step will focus on how to incorporate the use of social media in innovative ways that addresses this previously mentioned "prime directive". As can be seen in the following diagram, the possibilities are endless in achieving this goal.