Greetings-
In fostering a culture of innovation within the enterprise of online education, we continue to apply habits of the mind as they apply to higher thinking skills that we want to instill in our students. However, I will suggest to you that in the digital age, we must go beyond what was described by Benjamin Bloom so long ago. 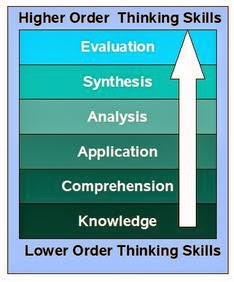 The Habits of the Mind that come into play in this instance are:

These habits of the mind if implemented throughout a curriculum will take you only so far. The question is will these habits as proposed by Art Costa and Bena Kallick (2000) foster innovation in our students as an enduring attitude that will result in our societies reaping benefits? This is a rhetorical question as you might guess. The answer is no. In order to develop a culture of innovation in online education, we need to go beyond what Bloom suggested. The first modification would look like the following diagram which was produced by Andrew Churches(2010) 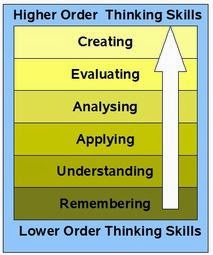 You will notice that a new level is added labelled "Create". Ultimately, in order to progress to a culture of innovation, it is necessary that something is created which has value. This fits very well with the habits of the mind shown below:

In an online course, all the tools of the Internet, especially those that allow a student to create an environment depend upon the characteristics above and are part of the students' way of learning. However, once the students have created something that is uniquely theirs, is that the end of the line?

I use to teach students about robotics and one of things I noticed was students demonstrated all the different stages of Bloom's Taxonomy. By listening to them and asking questions it was clear that the students, individually, were at different stages on the Bloom continuum. One of the final tasks for the students was to use what they had learned to built a working model of a robot. You would think that that would be the end of it but instead something very interesting happened. At the end the student groups, without my direction, started to diagram for me ideas that they had to extend what they did to other potential applications. This started a cascade effect of ideas in which each student contributed an idea and the potential pros and cons. I found this to be remarkable because it was going against an attitude that seems to be a systemic problem in our society,that being, a cynicism concerning the future.
Therefore, I would propose that we need to go beyond Bloom, Costa and Kallick, and Churches to add another level that I will term the "Cascading Ideas Effect".

I will elaborate on this concept in the next posting....