Re-Writing the DNA of a Learning Culture---Part I

In the previous post I suggested that in order to have an effective learning culture, we first would have to acknowledge that the following ideas are valid:

"The world does not cater to you; you must adapt and cater to new clients, new markets and a new breed of employees!"
Jack Welch, a well known thought leader, expresses this idea more succinctly when he states:
"...When the rate of change outside an organization is greater than the change inside, the end is near..."

The Business Case for An Effective Learning Culture

A question to think about is this:

"Why do people work at a company such as Google?"

When the new generation of employees were surveyed as to what they consider the most compelling reasons to work at Google, the most overwhelming choice made was to learn. Although salary and benefits were important, these were not the first choices.
We could ask a similar question about working for Apple. Steve Jobs was a demanding but prolific visionary. Within the Apple organization, the learning culture was extremely important. The importance of the learning culture had a demonstrable impact on Apple's recruiting practices. 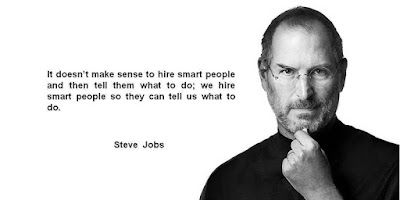 Out of Steve Job's vision came a very crucial realization that became a force in the Apple organization which simply put is this:

"An effective learning culture is a primary driver for innovation!"

When you consider how much organizations struggle with the idea of innovation to the point of detesting the very term, perhaps our problem is that we have neglected to develop the most important driver, that being an effective learning culture. It also brings to mind another very sobering question for organizations, given the Google and Apple experience, that they need to ask:

"Do we have the kind of learning culture that attracts top talent?"

If your answer  to this question is no, then the follow up questions are:

Some will say that they still have reservations. In Part II & III of this post, I will continue with why such actions to re-design the learning culture makes sense, identify continuing barriers and suggest how the use of a new role, the Learning Principles Expert (Guru?), will help revitalize not only the learning culture but also foster innovative thinking on the part of engaged employees...