It was also predicted that 2016 would see the launch of Oculus Rift (Facebook), the first consumer level virtual reality headset that does not require a Smartphone like Google's Cardboard and Samsung Electronics Gear VR.

HTC predicts that its HTC Vive will represent a technological breakthrough in Virtual Reality, projected to be introduced in April 2016. It was also revealed that Audi will be installing Vives in pretty much all of its flagship stores to offer virtual test drives of their products.

To state that technology companies are "jockeying to position themselves to capitalize" on the evolving technology scene would be gross understatement!

So, the obvious question, with regards to E-Learning, that needs to be asked is:


"Is Virtual Reality ready for prime time as a tool to make learning experiences irresistibly engaging and capture the essence of being in an immersive learning environment?"

The technology companies would have you believe that in 2016, the year of Virtual Reality, that this would be a "slam dunk" for the affirmative. Of course, their answer is slightly skewed by their motives.
What Needs to Be Done to Slave This Technology to E-Learning

As mentioned in the previous post, it is incumbent upon us who are involved in ID and instruction, not to let the "tail wag the dog". Instead, the "tail needs to be customized" so that it performs according to the requirements of a new adaptive and agile pedagogical mindset. Interestingly enough, the primary purpose that many of the new virtual reality technologies are designed for, games and entertainment, provide important clues as to what the focus of our design efforts should be. What we are learning about the immersive techniques of  serious games and the thoughtful engagement that they promote can find the most productive application in E-Learning.

The evolution of the web's "Second Life" has shown us that we can develop an immersive community of learning and diversity that is representative of the human condition and its aspirations. It has also shown us that there is great potential in the development of collaborative learning networks that span the globe.
If this is true, then what needs to be done?

Some Ideas
Unlike, the various business and entertainment initiatives, use of such technologies in E-Learning is different because in education, we strive for "equity of access" for learners. In the past, technology marketers such as Microsoft & Adobe to name two, have made a good effort to make equity of access possible with education plans tailored to the education market. With regards to the use of these new technologies in E-Learning these initiatives need to be continued. I would suggest that given the fact that we are in an information and learning age that such initiatives should be extended to help improve the learning cultures within the business sector. 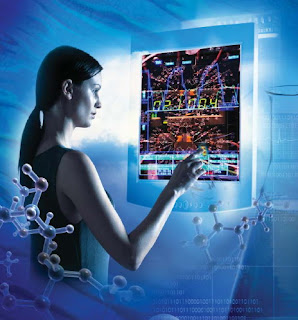 It is important to remember that the goal that we strive for in regards to our learners is that they would achieve a deeper, sustainable learning that is driven by intrinsic motivation more and extrinsic motivators less. Learning needs to be a social experience that is collaborative and fun but also meaningful and challenging. Without the challenging aspects, we can not spark creative and innovative problem solving of real world problems.

Next...getting away from the culture of multitasking and closer to making use of each others gifts in collaborative networks.
Posted by Ken Turner at 12:11 PM

Augmented Reality technology can be applied to all kind of fields and levels of knowledge. However, it is true that it maximizes its benefits when it comes to Skills Training. AR provides the perfect mix between reality and virtual reality, so real physical devices can be used while saving costs and reducing risks.

Absolutely agree with your comment! The real test comes when the technology develops so that it is flawlessly in sync with the person's biological and physical patterns. Absolute personalization must incorporate the use of biometric sensors so that there is a match with the person using augmented and VR technology.