The Spectre of Social Engineering in E-Learning: Part I--The Problem

When we hear the term "social engineering", we will often think about the type of criminal behaviour demonstrated by "hackers" and "crackers" to obtain information illegally from a computer system often belonging to a company. A "hacker", by the way, is a person who breaks into other computers out of curiosity and usually not with a malicious intent whereas a "cracker" breaks in to computers either to profit by it, to destroy the reputations of others or to create a cyber terrorist attack for the purpose of maximum damage to the greatest number of people.

The process of social engineering to covertly obtain marketable data usually involves the exploitation of the weakest link in the company chain of personnel.


We often think of such legendary "crackers" as Kevin D. Mitnick who made a habit of breaking into presumably secure computing networks and taking valuable intelligence from government computers. The recent revelations in regards to "Wikileaks" and the political fallout that occurred has made such exploits on human vulnerabilities front page news and front and center in the public conscience.

However, we need to ask this question:

I am not a fan of outlandish conspiracy theories but I have been an observer of education on many levels, first in the "brick and mortar schools" and now in the world of E-Learning. When you can step back and view what is happening in education on multiple levels and then look at the state of our societies, it would be quite naive not to believe that what has been happening in education has not had the effect of changing the fabric of our societies and especially in regards to the way in which life is conducted by people in relation to other people. Education has become a maze that has many serious dead-ends with consequences.

Area of Concern #1: Teaching Learners What to Think Vs. How To Think?

If we think about how the definition for social engineering might be interpreted within the context of education, there is reason to be alarmed of the reality it presents. This reality has been with us for many decades and as stakeholders in education, we have surrendered our vigilance and our willingness to be astute critical thinkers to the large cabal of expertise made up of educrats, administrators and power brokers at high levels of governments. As we carry on our day to day lives, we essentially say to these groups that we are relying on their integrity to educate our most vulnerable citizens in ways that will enable them to be effective agents of change dedicated to the enrichment of the quality of life for all people.

Then, we stop, step back and look carefully at our societies to see the fruit of that trust. 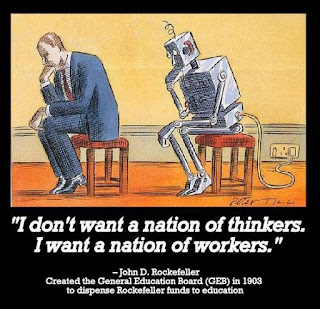 We really have to ask those people whether they truly want and are working towards educating learners to be effective critical thinkers in our societies or are they working towards shaping learners to become citizens who do not take the time to learn, to think, to weigh evidence on all sides of issues and are citizens who can be socially engineered to meet goals which are not their own.


" Do governments really want critical thinkers for citizens who can look at issues, weigh evidence, question candidates in intelligent, well thought out, ways and then make a thoughtful ballot cast or do they want citizens who are too busy in trying to raise their families have a decent life to really care about thoughtful voting?"

The type of learners I want to see in our societies are those who:

As citizens, in which ever society we are part of, how we educate our most vulnerable should reflect what Cicero said so long ago:

Translated it means: "The Good of the people should be the supreme law." Do you see this reflected in your own society or do you see something else at work leading to a growing cynicism and a paralysis of the will?

There are many ways to influence people into thinking the way another person wants people to think and our learners need to be aware of all these techniques and use them as a database to critically evaluate how they are being used in important life events such as elections which have serious effects on how the future unfolds or in some cases, unravels to our despair. This skill is one of the new "basic skills" in our societies that needs to be mastered because to not do so will have a profound on how we are able to live our lives in the future. With respect to E-Learning, which I will go into more detail on in Part II, this skill is absolutely a first level, must have skill for all learners.


Even statements as the above that seem to appeal to a life principle, needs to examined using effective critical thinking skills.