Critical Thinking and the Crisis of Credibility

On numerous occasions I have raised the alarm through posts that students in educational institutions are being taught "what to think instead of how to think". As a result of this entrenched attitude within education systems, education has become less about effective, authentic learning and more about indoctrination of views held on a variety of topics that favour only one side of topics and dismiss other points of view without considering the evidential merit of these points of view. We see the fruit of this on many university campuses where even speakers holding alternative points of view are denied access to campuses or if given access, their presentations are harassed by those with opposing points of view. A case in point here in Ontario, Canada is the case of Professor Jordan Peterson, who is a University of Ontario Psychology professor who is due to speak to a sold out crowd at the University of Western Ontario in London.

Due to the fact that Professor Peterson does not agree with the use of gender neutral pronouns in his classroom and openly criticizes the rise of political correctness on university campuses, the university is charging the student group who invited him to speak a $1200 fee to cover security which is not something they do in an equitable fashion when dealing with speakers invited to speak. Professor Peterson has made his views known on YouTube and is open to rational discussion on his views.


As a result of this retreat away from rational thought and discussion, societies are experiencing what I would term a " crisis of credibility". A crisis of credibility occurs when foundational systems such as education systems, religious systems, law systems, and systems of labour which were the bedrock institutions originally designed to serve the people, lose the confidence of the people they were mandated to serve. The obvious question then becomes:


"What are the causes of this crisis of credibility?"

Some of the causes that can be identified, as relating to education, the family and society in general might be the following:

Without this, they learn that feelings are what you should base your decisions on and therefore your actions. Anyone who has an opposing opinion, you should not have to listen to and to protect yourself, we have a vocabulary built up to dismiss them altogether thus freeing you from being upset. Please clear on this! I am not saying that feelings are not important because they are and we all have them. I am saying that it is wrong if they take the place of reason altogether.

"If elected officials who were elected to uphold the rule of law in government, encourage the breaking of our laws and abrogate the processes designed to maintain stability of law enforcement and protect the constitutional rights of all citizens then how can we in good conscience hold citizens accountable for the breaking of other laws?"

One of the first steps that we need to take in education is to stop promoting a false paradigm that is relegating reasoning to a frill topic in schools. In the past, the paradigm that has allowed our civilizations to advance may have looked like this:


We may have been inspired by an issue that truly moved us and consider an important issue or the events of the day required that we investigate due to a possibly negative impact on our lives. So, although "feelings" may have started us to take action, we followed a paradigm of necessary investigation based upon reason.

So, what has changed?

Important issue----->only one side of the issue presented for acceptance-------> use of selected emotional multimedia assets are used to suggest how you should feel about the issue----> based upon your feelings, put pressure on others who do not share your viewpoint through the use of dismissive vocabulary that uses ad hominem argumentation as a tool to censor debate------> engage in forcing the point of view into enforceable laws upon all people.

The end result of this new paradigm which we even now see being played out in the current events and in social media circles is the systematic sabotage of the great gift that we all have for critical thinking. 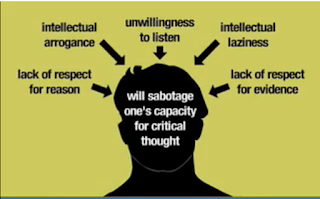 So, how do we stop this type of paradigm from continuing to wreak havoc on the intelligence of learners?

We can not as civilized societies remain civilized as long as we allow this paradigm to be constantly reinforced throughout all levels of the education systems and the curriculums that they subscribe to. As thinking individuals, we hold that the following truths should be available to all citizens with the understanding that the goal is to strive to help improve the quality of life for all people. 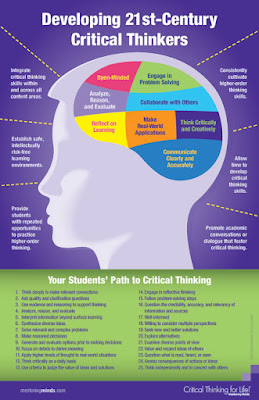 E-Learning: The Potential and the Danger

One question that may have occurred to you is:

"What does any of this have to do with e-Learning?"

One of the great advantages to e-Learning is that it is no longer dependent upon local constraints but instead has a global reach. The problem of the disassembling of a paradigm that has served civilizations well in favour of the false paradigm noted above is not just a North American problem. It is evident in the education systems of many countries on a global scale that this problem is pervasive. We see in in discussions in global politics and even as far as organized sports among countries.

The time to stop this paradigm is now so that your children and their children will enjoy a quality of life that puts the needs of others above self-entitlement but even more importantly, that the decisions they make and defend passionately, are based on the building blocks of sound reasoning.

Together, we can overcome the great crisis of credibility that we now face. We must overcome it....