By identifying the problem that needs to be overcome, we can propose that the solution involves the transformation of compartmentalization of subjects to cross disciplinary learning. 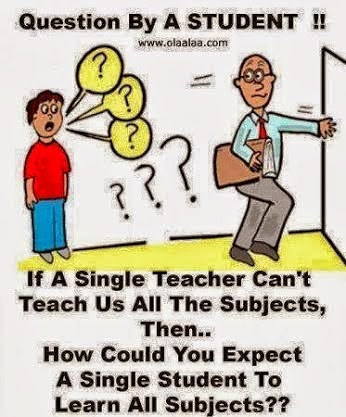 The STEM(Science/Technology/Engineering/Math) initiatives have the right ideas but what we should realize is that this cluster of subjects having complimentary skill sets are not the only configuration that could be used. The nature of the problem determines what skill sets are needed to get a clear and complete picture of the problem presented.
We can come back to the metaphor that was used in an earlier post of the six blind men describing an elephant.

Each blind man had his own perspective in dealing with the problem but their perspectives were compartmentalized. There was no collaboration to gather more information or data among them that would help shed light on the problem. The only thing that they had in common, as far as we are told, is that they were blind.

The Nature of Collaboration: Cross disciplinary learning suggests that collaboration is important only as long as the perspectives brought to the problem help give a more detailed analysis of the problem. In order for this to be effective it is necessary to know what talents and attributes each person brings to the collaboration and how this helps bring to light the full picture of the problem. For online students what this would mean is that they would need time to socialize with each other for a directed purpose of finding out what the others were good at. Sir Kenneth Robinson pointed out the great myth of dividing students into academic and non-academic. What this myth ignores is the great capacity that all have for creative thought which is essential for divergent thinking which leads to innovation. The following is a problem example:


Scenario: " The Preservation of the Remains of the R.M.S Titanic

Problem: Suppose that a collaborative team was presented with the following scenario:

" The R.M.S. Titanic has rested upon the ocean floor since its fateful sinking due to a collision with an iceberg in the early morning hours of April 15, 1912. Today, the ocean based sensor net system has detected growing seismic shifts in the area that is the final resting place of the Titanic and a crevasse has opened up in the area threatening the remains of the Titanic.

Since the remains of the Titanic is part of a world heritage site and a memorial for the families whose ancestors were part of the final voyage, it is imperative that your team come up with a solution(s) to this distressing problem. We need solutions to prevent this disaster!"

Collaborators Profiles:  In order to begin to solve this problem, the collaboration team needs to find as much out about each other as possible. In an online environment, the use of YouTube to produce autobiographies highlighting the talents and attributes of each student could be made.

Analysis of the Problem: In order to get a complete and data rich picture of the problem the following question needs to be discussed among the collaborators:


"What skill sets and what knowledge from what disciplines will be required to fully understand the problem?"


Question: "Although the collaborators bring their skill sets and attributes to apply to the problem, what happens if they are lacking in the prerequisite skill sets in order to fully analyze the problem and come up with solutions?"

Next..the importance of the transformation of mentor networks.